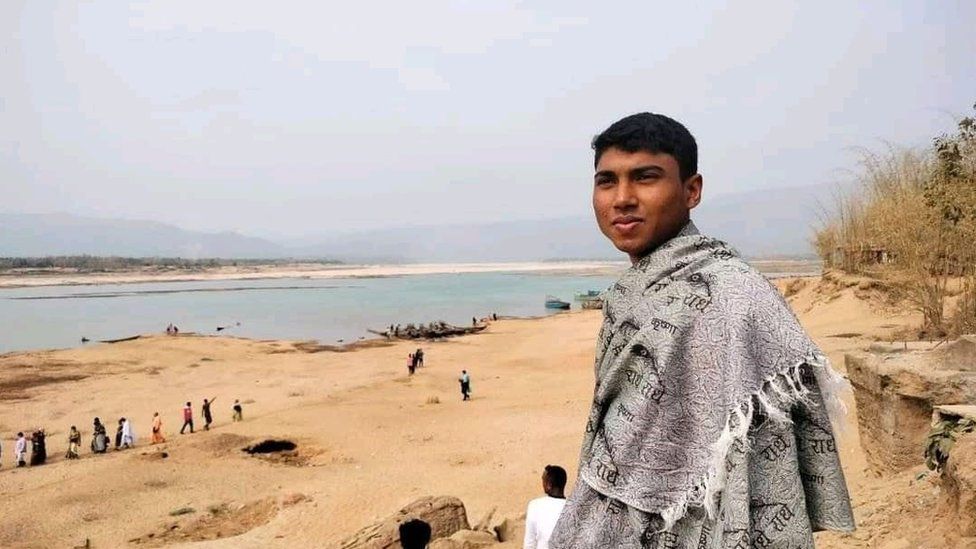 Hindus make up less than 9% of Bangladesh's population of about 165 million people. Despite previous attacks on religious minorities, community leaders say this is the greatest large-scale mob violence against the group in the country's history.

Like many Hindus, Bonolata Das believed a temple was a safe and sacred place.

She wasn't worried when she allowed her 21-year-old son, Pranta Chandra Das, a college student, to stay at a temple complex last week in Bangladesh's south-eastern Noakhali district.

But tragedy struck. He was allegedly beaten to death there by hundreds of religious fundamentalists in the Muslim-majority nation.

"My youngest son was so close to my heart. After his death, I have lost my heart and have lost everything," Mrs Das said, crying inconsolably.

Her son was a victim of mob violence that began after rumours spread that the Quran had been insulted at a special pavilion set up for the annual Hindu religious festival, Durga Puja, in the town of Comilla.

Within hours of the rumour spreading on social media, hundreds of Muslim fundamentalists went on a rampage targeting Hindu religious pavilions in Comilla. Soon, the violence spread to other parts of Bangladesh. Temples were desecrated and hundreds of houses and businesses of the Hindu minority torched. Seven people, including two Hindus, were killed and many more injured in days of violence. Police opened fire and used tear gas in several places to contain the raging mob.

After hearing about the attack on the temple, which is run by the International Society for Krishna Consciousness (ISKCON), Mrs Das and her family frantically searched for her son. His body was found a day later in a nearby pond. It was marked by injuries, she said.

"We are scared to go back to our home and afraid of further attack," Mrs Das told the BBC. "At the moment, I am staying in the temple itself."

Hindus constitute less than 9% of Bangladesh's more than 165 million population. Though there have been several attacks on religious minorities in the past, community leaders say this is the worst large-scale mob violence against the community in the country's history.

"It was a pre-planned attack on the Hindu community," said Achinta Das, the head of the Hindu festival committee in Comilla town. He denied that Hindus would offend a religious text like the Quran.

A day after the temple attack, prime minister Sheikh Hasina condemned the violence, saying the perpetrators "must be found out".

"We did so in the past and will do it in future as well," she said. "They must face appropriate punishments."

Despite her warning, the violence spread to other parts of Bangladesh, triggering fear and panic among members of the minority community. At one point, the government had to deploy security forces in 22 districts to control the riots.

Nearly a week after the violence began, dozens of Hindu houses were torched in northern Bangladesh after another social media post reportedly alleged Hindus were defaming the Islamic holy place.

"When we heard the mob was coming, I ran with my two young children to save ourselves and we were hiding in a paddy field," said Nanda Rani, from Birgunj in Rangpur district told the BBC. "From there we could see the mob setting fire to our house. It's totally destroyed. We are now living in tents."

The Bangladeshi home minister, Asaduzzaman Khan said hundreds of people had been arrested and an investigation had been launched. He told reporters that people were intentionally spreading "propaganda" by "uploading video footage of many brutal incidents that took place in the country in different times and in the past" in order to mislead others.

Leaders of Islamist movements have said they are opposed to violence against any minorities.

"Those attacking temples should be punished. We all should live in peace and harmony," said Maulana Mujibur Rahman Hamidi, the vice chairman of the Bangladesh Khilafat Andolan, an Islamist political party.

But Muslim leaders, including Mr Hamidi, have also publicly called for harsh punishments against those who defame Islam.

Bangladesh has prided itself on its secular credentials since it gained independence from Pakistan in 1971. Though the constitution stipulates Islam as the state religion, it also upholds the principle of secularism.

But analysts point out that hard-line Islamist groups have gained prominence over the years and the governing Awami League, which has been in power since 2008, had failed to tackle the rising religious intolerance and fundamentalism.

"The government has for political expediency compromised with the fundamentalist forces, particularly in the back drop of constrained democratic polity," said Debapriya Bhattacharya, an eminent economist.

"As a result, fundamentalists have got prominence, recognition and influence," he said.

The subcontinent has a long history of religious violence, dating back to 1947 when British India was carved into Hindu-dominated India and Muslim-majority Pakistan.

In 1971, Bangladesh, then East Pakistan, gained independence from Pakistan after a bloody war. India sent in its troops in support of the Bangladesh war of independence.

The shadow of partition still hangs over South Asia.

"The attacks on the Hindu community in Bangladesh have been systematic over the decades," said Rana Dasgupta, General-Secretary of the country's Hindu, Buddhist and Christian Unity Council.

"There is an orchestrated attempt to grab Hindu houses and lands in Bangladesh and they are being forced to leave the country."

Hindu community leaders say their population has come down from 30% in 1947 to less than 9% now. Most have fled to neighbouring India.

"The lack of a proper investigation not only shows a pattern but also complacency when it comes to protecting minorities," said Saad Hammadi, South Asia campaigner for Amnesty International. "The communal violence is recurring because of perceived impunity and a lack of effective remedy."

The Bangladeshi law minister, Anisul Huq, denied the investigations on the attacks on the minorities were not making any progress.

"All those incidents were being investigated. In such cases, it takes a little time. We are trying to speed up the investigation as much as possible," Mr Huq told the BBC.

He also rejected criticism that the government was appeasing the Islamists. "Any notion of that kind is not correct. We want all members of all religions to live harmoniously."

Some say that rising anti-Muslim sentiment across the border in India, under the Hindu-nationalist BJP party, is partly responsible for triggering anger among hardline Bangladeshi Muslims. The BJP has stoked fear of immigration from Bangladesh, causing anger in Dhaka, and Hindu hardliners in India have called for immigrants to be deported to Bangladesh.

"What's happening in India - the treatment of religious minorities - is very unfortunate. It is also being used by some as an excuse to persecute the minorities in Bangladesh," said Mr Bhattacharya, the economist.

"But it is the duty of each government to treat their own citizens properly, and to protect their rights and their security," he said.