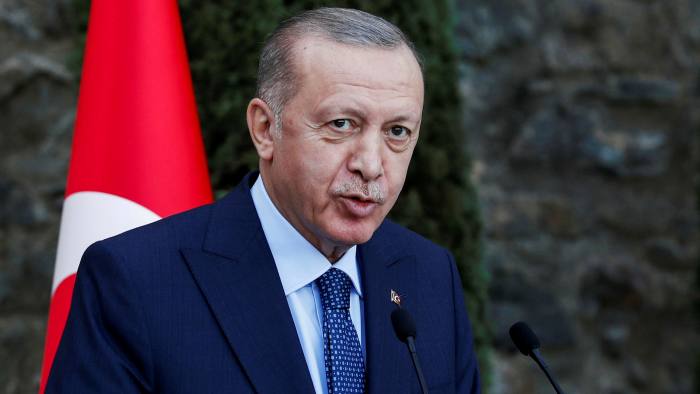 Despite growing inflation and a faltering currency, Turkey's central bank rejected warnings from the business community and opposition parties by cutting its main interest rate.

Bucking the global trend at a time when both developed economies and other emerging markets are adopting a hawkish stance, the bank lowered the cost of borrowing by a full 2 percentage points — a far deeper cut than the markets expected.

The lira, which had already lost about 20 per cent of its value against the dollar this year prior to the announcement, fell a further 2 per cent on the news, hitting a fresh low of TL9.47 to the US dollar.

Paul McNamara, a fund manager at asset manager GAM, said the decision to lower the one-week repo rate to 16 per cent was “either brave or foolhardy”, adding: “I strongly lean to the latter.”

Thursday’s move took place in the shadow of President Recep Tayyip Erdogan, a notorious opponent of high interest rates, who has asserted greater control over the nominally independent central bank in recent years.

Erdogan, whose view that high interest rates lead to inflation runs counter to established economic orthodoxy, has increasingly meddled in monetary policy as he consolidates his control over the Turkish state. He has pushed for rate cuts even at the cost of soaring inflation and turmoil in the financial markets.

Ali Babacan, who served for years as Erdogan’s economy tsar before launching his own party in 2020, said on Thursday that the central bank had cut “under orders”.

The bank has faced growing pressure from the country’s opposition, which has been buoyed by Erdogan’s declining poll ratings, to act in line with its independent mandate.

Hours before Thursday’s announcement, Republican People’s party leader Kemal Kilicdaroglu reiterated a previous warning to the central bank that it must act in the public interest. “Dear bureaucrats,” he wrote on Twitter. “When taking decisions today, your guiding principle should be nothing but the welfare of our nation.”

In the lead-up to the decision, Omer Koc, one of Turkey’s leading business tycoons, and the Turkish business association Tusiad issued public warnings of the harm being done by the spiralling exchange rate and runaway price rises.

Meral Aksener, who leads a rightwing opposition party, described the latest move as “a great shame”, adding: “This great nation does not deserve this.”

Viktor Szabo, an emerging markets portfolio manager at Abrdn, said that “the worst-case scenario” for the credibility of the central bank had played out. “There’s no one left there to stand up to Erdogan.”

The decision to cut the interest rate for a second month in a row pushes the country’s real interest rate deep into negative territory, once annual inflation, which stood at almost 20 per cent in September, is taken into account.

The move risks piling fresh pressure on the crisis-ridden lira and is likely to further deter vital foreign capital at a time when international investment in Turkey is close to its lowest point in the past 20 years, say analysts.

The central bank said in a statement accompanying its decision that there was “limited room” for further rate cuts before the end of the year.

Haluk Burumcekci, an Istanbul-based independent analyst, said the statement signalled small reductions in the final two rate-setting meetings of the year but that “the door is open for additional rate cuts in the new year”.

Phoenix Kalen, an emerging markets strategist at Société Générale, said the decision suggested Erdogan was planning to bring forward the next round of presidential and parliamentary elections, currently scheduled for 2023.

Such a strategy might have short-term logic but the longer-term impact could be devastating to the Turkish economy and financial system, she warned.

“If you’re looking at any longer timeframe . . . this decision is completely nonsensical,” she added. “You’re going to spur hyper inflation and dollarisation . . . You’re encouraging speculators to go after the currency. You’re going to hurt corporates, with all the FX denominated debt that they still have. From any medium-term perspective, it is really damaging to the monetary policy framework of the country and the financial stability.”